Ok. I couldn't wait. Here's the story of the stained glass window. I explained in the previous post that my front door had a large section of clear glass. Since that window provides passers-by a direct view through the foyer into my livingroom, I wanted to cover it at first with a curtain. Then, I had the idea of engaging the talents of two friends of mine who have a glass studio nearby. My first inclination was something art nouveau. I had seen some of their other pieces and admired a canopy of grape vines that appeared in one window. This was the beginning of the nautilus window. The major goal was something asymetrical with the nautilus shell and foliage similar to the vine canopy in the other work I liked. The result is an explication in glass of Oliver Wendell Holmes' poem "The Chambered Nautilus". I had read the poem for the first time when I was 16, and immediately counted it among my favorites of the American canon. The line "Build thee more stately mansions, O my soul" was a command that was hammered into us sitting in Father Tribou's 11th grade American Lit class, reminding us school boys that we were always to strive for excellence and were never to be satisfied with mediocrity: Onward and Upward! What better symbolism than this for an entry way? The sea, the shore the foliage and the clear shell in the center are curious to those who do not know the poem, but I enjoy telling the story of the window and reciting the verse. The window is made of Armstrong glass from Atlanta, and the pieces are joined using the copper foil technique, which allows a large piece such as this to maintain its shape with much strength, without the necessity of bracing (as is the case with lead-came joints). 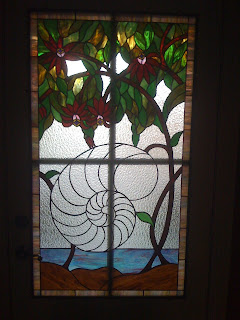 This is the ship of pearl, which, poets feign,
Sails the unshadowed main,—
The venturous bark that flings
On the sweet summer wind its purpled wings
In gulfs enchanted, where the siren sings,
And coral reefs lie bare,
Where the cold sea-maids rise to sun their streaming hair.

Its webs of living gauze no more unfurl;
Wrecked is the ship of pearl!
And every chambered cell,
Where its dim dreaming life was wont to dwell,
As the frail tenant shaped his growing shell,
Before thee lies revealed,—
Its irised ceiling rent, its sunless crypt unsealed!

Year after year beheld the silent toil
That spread his lustrous coil;
Still, as the spiral grew,
He left the past year’s dwelling for the new,
Stole with soft step its shining archway through,
Built up its idle door,
Stretched in his last-found home, and knew the old no more.

Thanks for the heavenly message brought by thee,
Child of the wandering sea,
Cast from her lap, forlorn!
From thy dead lips a clearer note is born
Than ever Triton blew from wreathed horn!
While on mine ear it rings,
Through the deep caves of thought I hear a voice that sings:


Build thee more stately mansions, O my soul,
As the swift seasons roll!
Leave thy low-vaulted past!
Let each new temple, nobler than the last,
Shut thee from heaven with a dome more vast,
Till thou at length art free,
Leaving thine outgrown shell by life’s unresting sea!
Scribbled by Jason Pennington at 7:55:00 AM

The window is just beautiful. Your friends are true artists.

Ohh, I love it! I love stained glass. How awesome that your friends did this for you.