POSSIBLY THE ORIGIN OF
THE LORD'S PRAYER HAND-HOLDING???

From another Karl Keating e-letter - he's got some good stuff, ya know!

Mr. Keating goes into the origins of hand holding, namely during the Lord's Prayer. He mentions this reply to a question to the Adoremus Bulletin:

"No gesture for the people during the Lord's Prayer is mentioned in the official documents. The late liturgist Fr. Robert Hovda promoted holding hands during this prayer, a practice he said originated in Alcoholics Anonymous. Some 'charismatic' groups took up the practice."

Says Keating:
"Periodically, on "Catholic Answers Live" I am asked about hand-holding during Mass and explain that it is contrary to the rubrics. Usually I get follow-up e-mails from people who say, "But it's my favorite part of the Mass" or "We hold hands as a family, and it makes us feel closer."

The latter reply had to come from someone with a Ned Flanders intelligence. I firmly believe in close family, but just praying together brings out closeness in many families. You can even receive Holy Communion as a family in many cases. You don't have to break the rubrics just to be close, do you? Let's break the rubrics as a family, shall we???

Now, let me attack this "favorite part of the Mass" crap. For me, the high point of the Mass is not the hand holding. It's not the celebrant's homiletic punchline. It's not even a really good hymn or Mass setting. It's receiving the Body and Blood, soul and divinity, of our Lord Jesus Christ.

Keating closes the hand-holding portion of his e-letter with this:
"About the former comment I think, 'If this is the high point of the Mass for you, you need to take Remedial Mass 101. The Mass is not a social event. It is the re-presentation of the sacrifice of Calvary, and it is the loftiest form of prayer. It should be attended with appropriate solemnity.'" 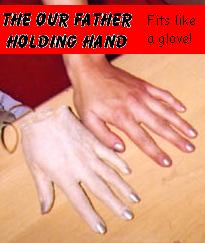 Some may need Remedial Mass, 101, others need this here Our Father Holding Hand (description here). And for others, perhaps Catholicism for Dummies from The Ox Files. Some just need to be laughed at (or even laughed with).

But then, some are still getting off the bottle.

Actually, isn’t the traditional highpoint of the Mass the consecration?

Pius XII, in “Mediator Dei”, said that seeing the general communion of all present as the highpoint of the Mass was an error.

You may be right, Cantor.
BMP

And we being fed the Body and Blood of Our Savior is what exactly if not true intimacy?

I have suggested an our father joy buzzer in the past. That would help to stop the process.

Jeff, I don't think I've seen that one - and I've seen many hilarious things in your archives. You got this one in there?
BMP