HOW A HISTORIC CHURCH WAS SAVED FROM DESTRUCTION 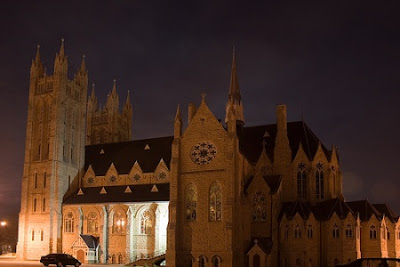 Bear-i-tone just posted a link in the combox of an earlier post of mine to the story of how Dick Vosko almost got the chance to wreckovate the Church of Our Lady in Guelph, Ontario. Thankfully, the people of the Church of Our Lady knew enough to run him out of Guelph. Here's the full story (emphasis and snarky remarks mine).

How a Canadian church was saved from destruction

In what has become a familiar story in many parts of the world, including Australia, self-proclaimed experts have decreed that the interiors of Catholic churches should be radically altered "in line with the teaching of Vatican II on the liturgy." (In other words, the so-called "Spirit of Vatican II") As a result, hundreds of beautiful and historic churches have been 'renovated' since the late 1960s, in a manner that in some cases would have done Oliver Cromwell proud. In fact, there is no demand in the Vatican II documents for radical alterations such as removing high altars, altar rails, pulpits, confessionals, etc.

Nevertheless, the push to make such alterations continues, as the following report indicates, except that for once, the forces of 'renewal' were thwarted, at least for the time being.
Parishioners of the historic Church of Our Lady of the Immaculate in Guelph (Hamilton Diocese, Canada), known commonly as "the cathedral," rallied earlier this year to stop a drastic plan to alter the awe-inspiring interior of their magnificent church.

Father Richard Vosko, a priest of the American diocese of Albany (New York State) (and wreckovator extraordinaire), who had proposed the radical plan to remove the church's marble communion rail, confessionals, high altar and rearrange the pews, was still paid $60,000 for his plan to wreck the church's interior; but, parishioners will enjoy - at least for the foreseeable future - worshipping God in the magnificent surroundings crafted by their ancestors. (They paid him sixty grand just for his plan? Hee haw, hee haw!)

On Saturday, 13 March 1999, the parish priest, Monsignor John Newstead, informed parishioners that, after consultation with Bishop Anthony Tonnos of Hamilton, Fr Vosko's plan would not go forward because of overwhelming opposition by parishioners. (Good!)

The Church of Our Lady of the Immaculate is an enormous neo- Gothic, twin-towered church modelled after the Cathedral of the Three Kings in Cologne, built by parishioners at the turn of the century of stone cut from local quarries.

"Basically what happened," said a parishioner active in the effort to block the 'renovation,' "is that we prevailed because we did our homework and Fr Vosko didn't. We told him that if everything was wrong, why didn't anybody tell us this for 30 years."

The parishioners' experience with Fr Vosko and his plans for the Church of Our Lady mirrors that of many other North American churches. (except that, sadly, many churches have fallen victim to Vosko and similar ilk).

In the mid-1990s, Guelph's parishioners were advised that the church's leaking roof had reached such a stage of disrepair that a major renovation of the roof was in order, which was estimated to cost approximately $3 million.

Parishioners understood the importance of the work, and began fund-raising and sacrificial giving on the part of many. However, before that fund-raising period was completed, Monsignor John Newstead announced his plan to "restore the interior." "People thought 'restoration' meant restoration," a parishioner said, "that dilapidated and worn out material would be replaced."

Then, in May of last year, Monsignor Newstead informed parishioners that the Church of Our Lady had contracted with Albany priest, Fr Richard Vosko, to come in and offer lectures and advice on how to renovate the church. "That's when we learned there was more afoot than just freshening things up. Fr Vosko told us that, under (the so-called Spirit of) Vatican II, the altar and its ornate surrounds were wrong and had to be removed (which we all know is pure bull$&!+); the altar rail should not be there; a recently-installed elevator to help access our handicapped people was in the wrong place; the altar itself had to come forward so no-one would be more than 60 feet from it; the baptismal font and confessionals were in the wrong places. (All of which is a total crock - and what in the sam hell does all this have to do with a leaky roof?)

"He didn't even like the big heavy wooden doors with their huge iron hinges. He said they were most unwelcoming. What Fr Vosko didn't know is that these doors were very welcoming to us. Many of the parishioners came from lands where their parents and grandparents were persecuted for the faith, and those heavy doors were most welcoming because people knew they could find sanctuary in the church. Fr Vosko wanted to take those doors off." (I suppose he was looking for doors like those that let you into your friendly neighborhood Quicky Mart.)

As is often the case in other parishes where Fr Vosko works, parishioners are never informed in advance that Fr Vosko has been retained, the cost of his services, and how he is to be paid. "We were simply invited to attend workshops to hear some proposals," said the parishioner. "We were told the renovation process would be 'open.' We were told, 'It's your church. We want your opinion'." (Not that it really matters because in most cases Vosko and company are going to screw up your church no matter what.)

In May 1998, Fr Vosko gave his first presentation, and then returned a month later to give an update, speaking each time to about 350 of the parish's 1,500 members. To most, Fr Vosko appeared arrogant, brash and insulting (in a matter similar to those who have blatantly tried to screw up the Church, not only in architecture, but liturgy and music too). "People were stunned and shocked by his presentation. Disbelief at his proposals was widespread. We couldn't believe a stranger would come into our church and tell us everything was wrong with it," said the parishioner.

As a result of those two meetings, upset parishioners began meeting on their own and formed a committee to oppose Fr Vosko's proposals, and eventually formed the Committee for the Preservation of the Interior of the Church of Our Lady, with eight parishioners taking the lead. The newly-formed preservation committee held a number of public meetings, and it soon became apparent that a sizeable majority of the parishioners opposed Fr Vosko's plans. (These are very smart parishioners!)

At one of the meetings, the group obtained 500 signatures on a petition to stop Fr Vosko's plan. Despite rising opposition, however, the "core committee" formed to ruin the church resisted popular reaction. The preservation committee made strenuous efforts to have a meeting with the "core committee," but were rebuffed repeatedly. (Nihil novi sub sole)

At that meeting, the members of the "core committee" sat in stony silence, not once uttering any comment or acknowledgement, and the meeting adjourned. Time passed, and the preservationists asked for another meeting.

Just before Christmas 1998, the request for a second meeting was granted. At that subsequent meeting, the preservationists were given the "Vosko II" report, which detailed the changes approved for the church - despite the fact parishioners had been told repeatedly no decisions had been made.

"So we spent most of the Christmas period preparing a five-page brief in response," a member of the committee said. "We presented that in early January, and to this day, we have not received any comment.

"However, that doesn't matter. Subsequently, the preservation committee called a general meeting of the whole parish - including the "core committee" - and we outlined the entire procedure to date. The parishioners were vociferous in their response, and made it very clear they did not want Fr Vosko's proposed changes." After that 9 March meeting, parishioners were informed the following Saturday by Monsignor Newstead that he had discussed the matter with the bishop, and "in view of the divisiveness which had occurred, the program had been dropped in its entirety."

I am so happy that the voice of the TRUE faithful prevailed, and the Church of Our Lady remains in its sacred form, and not wreckovated at the hands of Father Dick Vosko. This is a rare story of a parish that stuck to their guns and kept a beautiful church beautiful.
Peace,
BMP
Scribbled by Brian Michael Page at 7:05:00 PM

I think it is interesting to note that my archbishop was raised at that parish and actually studied the history of that church to write a booklet about it.