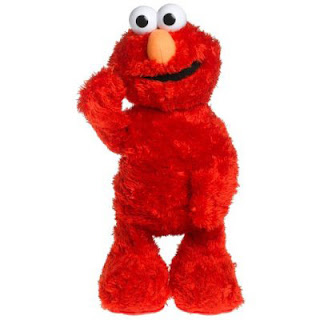 Friday, February 22, 2008 - AP - Elmo has a dark side, one Florida family says.It sounds like something the talking doll Chucky from the movies might say: "Kill James!" Instead, a Florida family says the threat to their toddler is coming from a talking Elmo doll.

The Bowman family, of Lithia, Fla., said an Elmo doll belonging to their 2-year-old son, James, began to spout death threats towards him after they changed its batteries, TBO.com reports.

The Elmo Knows Your Name Doll started saying "Kill James!" in a sing-song voice, the site reports."It's not something that really you would think would ever come out of a toy," James' mother, Melissa, told the site. "But once I heard, I was just kind of distraught.

"The toy's manufacturer, Fisher-Price, said it will issue the Bowmans a voucher for a replacement doll, TBO.com reports.

WOW! BTW, if you scroll down far enough on the sidebar, you can find more dirt on Elmo. Look for the "Terror Alert" with a picture of Ernie and Bert. When you click on it, you get to this site which explains Ernie and Bert alerts...

Ernie (orange alert): all commercial flights
Bert (yellow or "amber" alert): everything else

Ironically, the "safest muppet" in these alerts is Oscar (green), followed by the Cookie Monster (blue), Bert (yellow), Ernie (orange), and finally the muppet devil himself, Elmo (red).

Fr. Erik parts from his post with this:
Forget Teletubbies, this is the face of pre-school evil.

To me, Barney was the one that pissed me off. Him and his touchy-feely motif and "Aw, that's okayyyyyyyyyyyy". At least the Teletubbies told it like it is - "Uh ohhhhhhhh!" Yeah, I know - the whole Tinky Winky thing, him wearing the ballet skirt and carrying a handbag in a few scenes, I know. Dipsy and Po were my favorites.

Ma Beck clarifies in Father's combox:
"I was kind of distraught."
What an idiot.
Like I wrote on my blog, this doll DOES NOT sound EVEN REMOTELY like it's saying "Kill Kevin."
It sounds like it's trying to say "Hello, Kevin" (the doll is hooked up to a computer to learn your child's name, etc.) and the "o" part is missing.
This woman should be embarrassed to be such a doofus.
And she should be embarrassed that she bought her kid so many Elmo dolls.
The video from CNN showed her living room and there were no less than 15 Elmo dolls.
For. her. son.

OK, I must admit, I really thought at first that someone pulled a prank on the assembly line and it somehow got past quality control.

When my kids were babies, we had some talking toys that would come on by themselves in the middle of the night. These were toys that were turned off!

I was so creeped out by it, I threw them out. I never was a big fan of talking toys to begin with. Too Chuckie like!