The last episode of Assignment Christus Vincit was a Top Ten List that featured the Least Popular Organ Stops. That was featured in Podcast #18.

I now present to you Assignment Christus Vincit II. This time it's an episode of The Good, the Bad, and the Ugly. I'll supply the good and the bad. What I'm looking for is the ugly. The ugly usually requires some scenario involving the bad. Anyways, the best "ugly" scenario to the following not only get used and credited to whoever posted it to me, but he/she will get his/her blog/podcast/website promo'd as well.

This is Churches under construction sequel edition of The Good, the Bad, and the Ugly. Hat tip to Gerald at The Cafeteria is Closed for the Good and the Bad.

This is in Alaska, believe it or not. St. Andrew Church in Eagle River, AK. Gerald reports thus:
"They will not have carpet. The musicians will not be in the sanctuary. They will have statues and stained glass windows, and many other positive things. Maybe it's because they simply call themselves a parish." 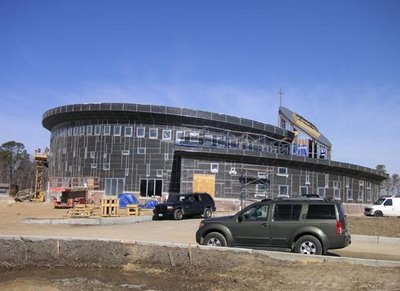 This is St. Theresa's Stadium, uh, Church, in Tuckertown, NJ. Here is what some people had to say about this roundhouse:
"It looks like a 50s burger joint." - Father Erik J. Richtsteig
"It reminds me of the Roman Colosseum; wonder if they'll feed our true beliefs to the lions of multiculturalism." - Jose
"Baseball has been played in buildings like that - called 'domed stadiums'." - (yours truly)
"'Future home of the Catholic Church Hall of Fame', or better, 'Future site of the 2007 Catholic Church All-Star Game'." - my son Chris
BTW, the ushers will be selling season tickets right after Mass.

The Ugly
That's where our readers come in. The best ugly scenario gets mentioned on our next podcast (#23), which airs this Sunday. Therefore, deadline is 11:59 PM EST this Saturday (4/1 - ah! good old April Fools Day, as well as my son Brian's birthday).

Email ThisBlogThis!Share to TwitterShare to FacebookShare to Pinterest
Tags Assignment Christus Vincit, churches/features (butt ugly), The Good the Bad and the Ugly

If the carpet's green I might just slip and call it astroturf.

Better still - it IS astroturf!
BMP

Is it my eyes, or does that coliseum look like it's sinking?