CATHOLIC EDUCATION and the GREAT OUTDOORS

This is the whereabouts of the brand spankin' new Wyoming Catholic College.

Imagine the addition of a basilica-sized chapel on this campus? Would be sweet!

Here is what Kevin Knight at New Advent says:

It's going to be really Catholic. With Benedictine spiritual formation, Confession and moral formation, Eucharistic adoration, Marian devotion and "a culture of daily Mass attendance."

The curriculum is Great Books.

Most intriguingly, outdoor education will be a mandatory part of the experience. Freshman orientation consists of a three-week backpacking trip in the nearby mountains. (And yes, they realize that most incoming freshmen will be Twinkie-weaned city mice. Guides will teach them everything they need to know while they're out there.)

But here's what the college's liturgical choir will be singing, according to the college's website:
The choir will sing both contemporary and longstanding traditional sacred music including Gregorian chant. (emphasis mine)

The fact that they've remembered to include those two styles I emphasized above is a great plus. In terms of contemporary, however, will that be the folk/pop styles, or just contemporary in age (a la Peloquin, Proulx, Rutter, etc.)? I'd be curious. I'd have no problem with the latter. 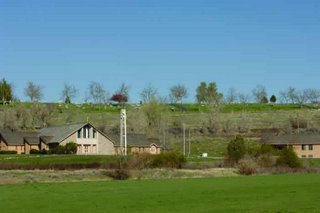 Here's the present church. According to the college website, the temporary site for WCC is located the Catholic parish of Holy Rosary Church on the southern edge of Lander, Wyoming.

Again, emphasis mine. Hmmmmm! Lots of nice basilica-style-ediface-friendly space. Doesn't have to be now. After all, the college is just starting out. But in later years, maybe?

Looks like they're heading in the right direction anyways.