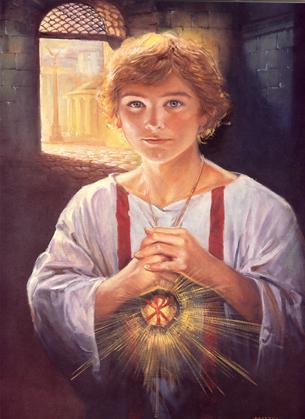 I've never really brushed up on the study of saints like I should - mea culpa, mea culpa, mea maxima culpa. Thanks to Shawn Tribe at the New Liturgical Movement, a curiosity of mine was satisfied.

Tarcisius was a boy of third-century Rome. His virtue and devotion were so strong that the clergy trusted him to bring the Blessed Sacrament to the sick. Once, while carrying a pyx, he was recognized and set upon by a pagan mob. They flung themselves upon him, trying to pry the pyx from his hands. They wanted more than anything to profane the Sacrament. Tarcisius’ biographer, the fourth-century Pope Damasus, compared them to a pack of rabid dogs. Tarcisius “preferred to give up his life rather than yield up the Body of Christ.”

Even at such an early age, Tarcisius was aware of the stakes. Jesus had died for love of Tarcisius. Tarcisius did not hesitate to die for love of Jesus.

Passage in italics from Youth When the Church Was Young, from The Way of the Fathers. Photo courtesy of Holy Ghost Church.

In our parish, the teenaged altar servers are also called Tarcisians (with him as patron); I had been blessed to be one, although I did not realize it at the time.

However, I especially loved his words while being stoned by the crowd: "I will never leave you, Jesus".